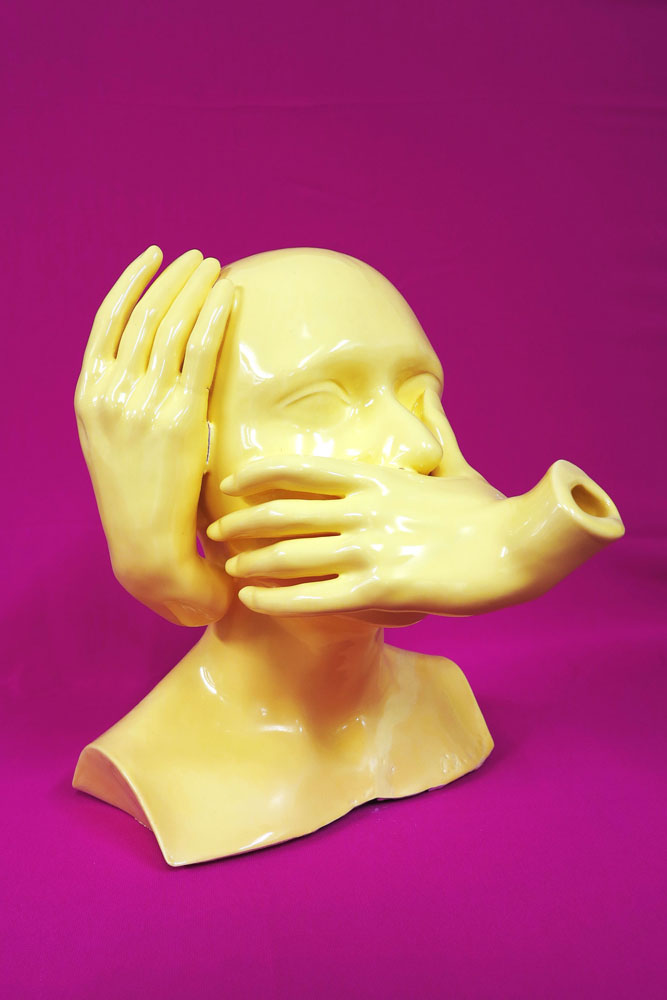 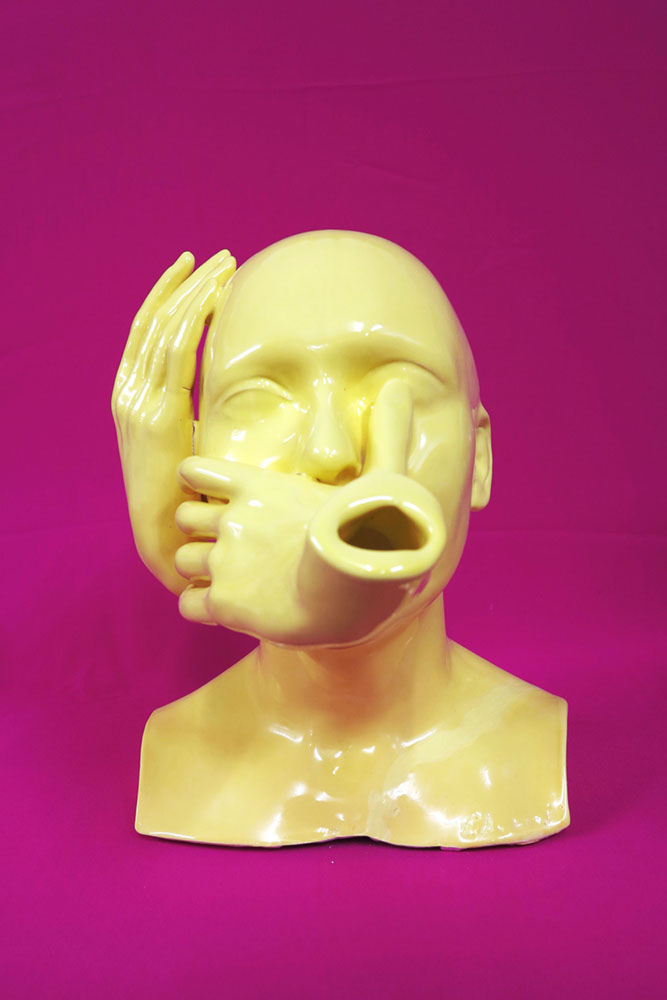 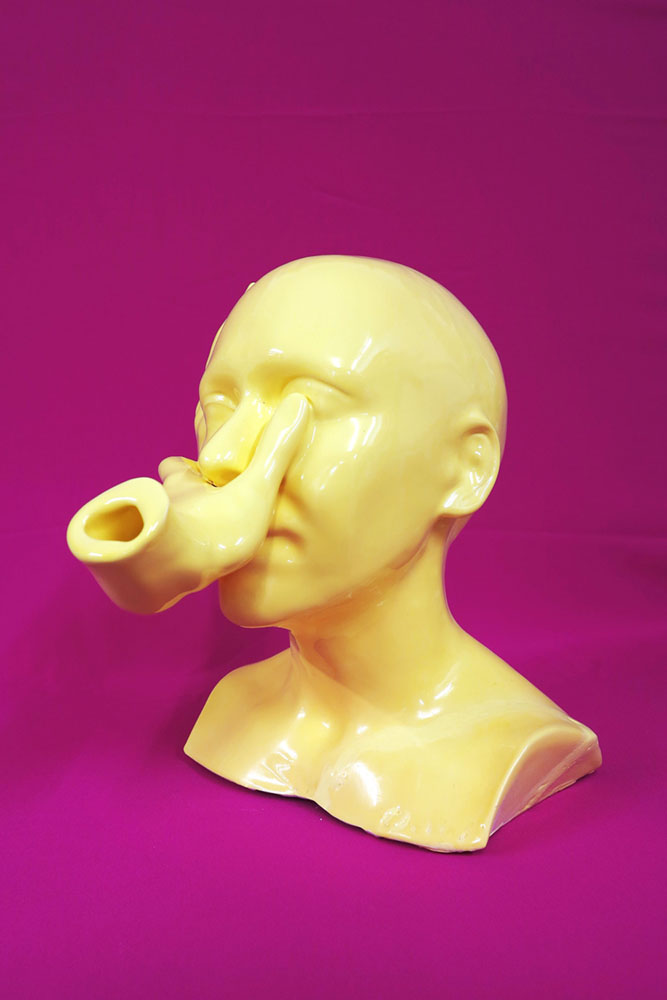 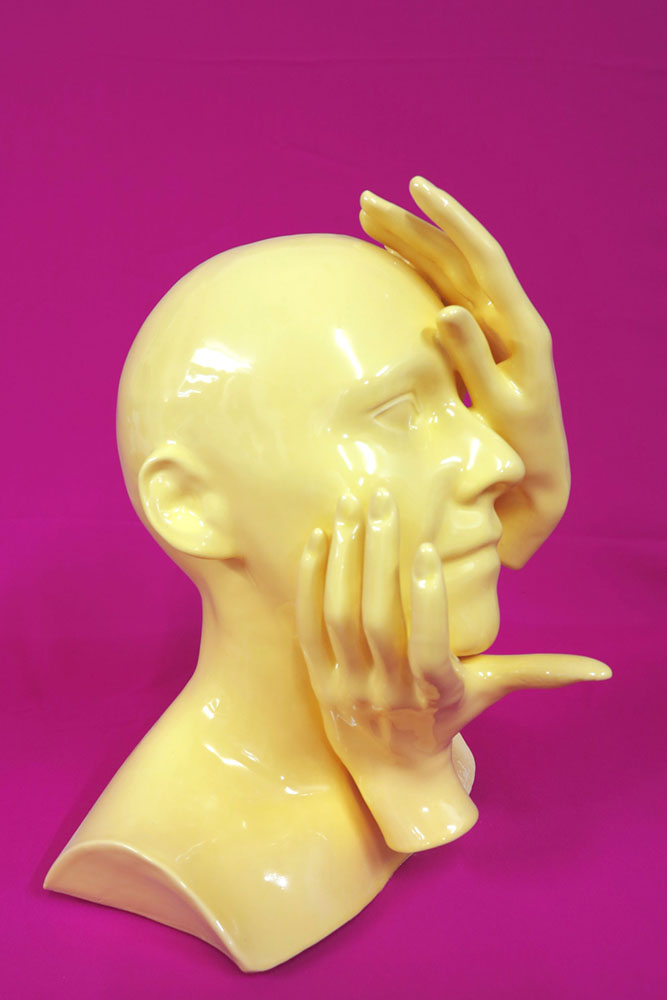 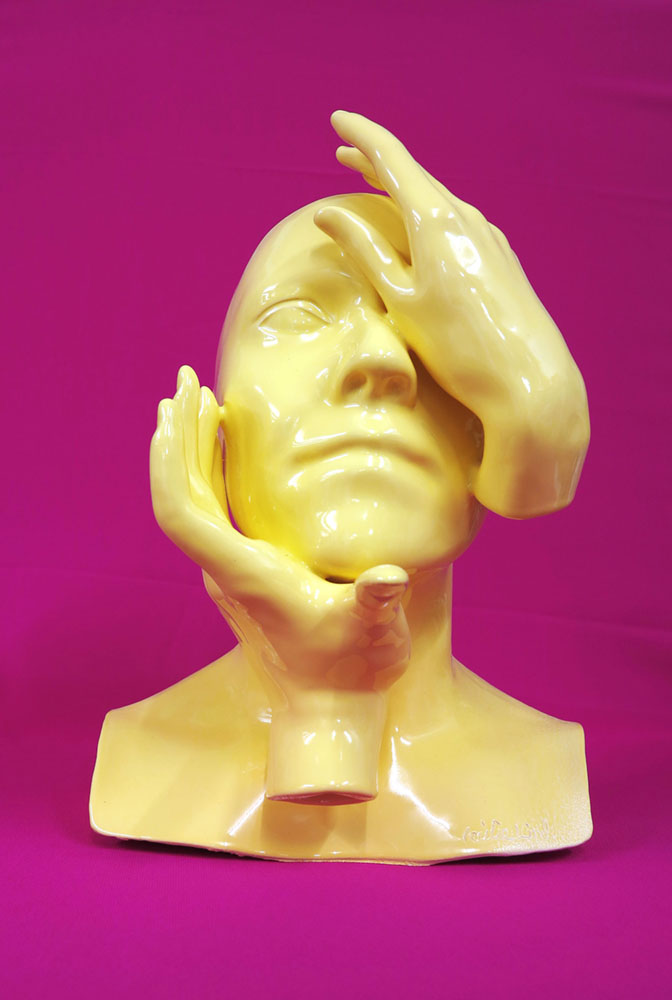 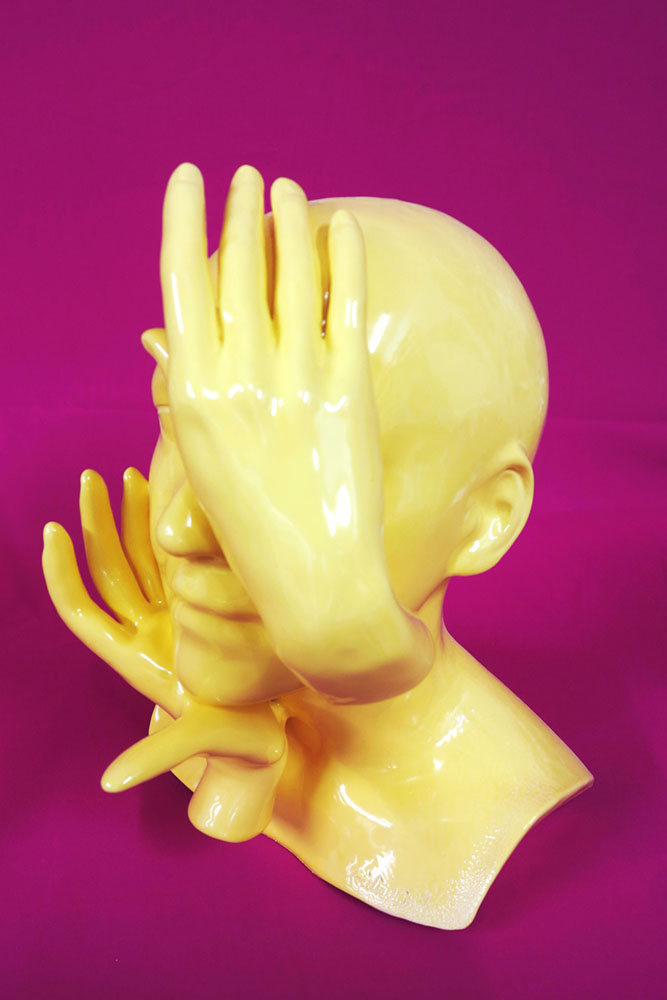 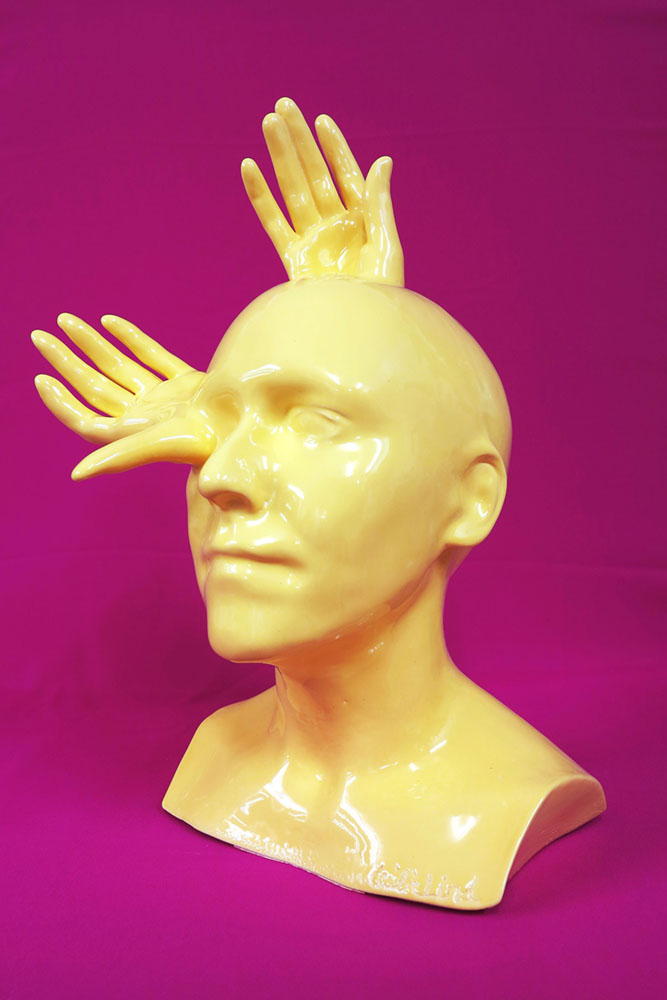 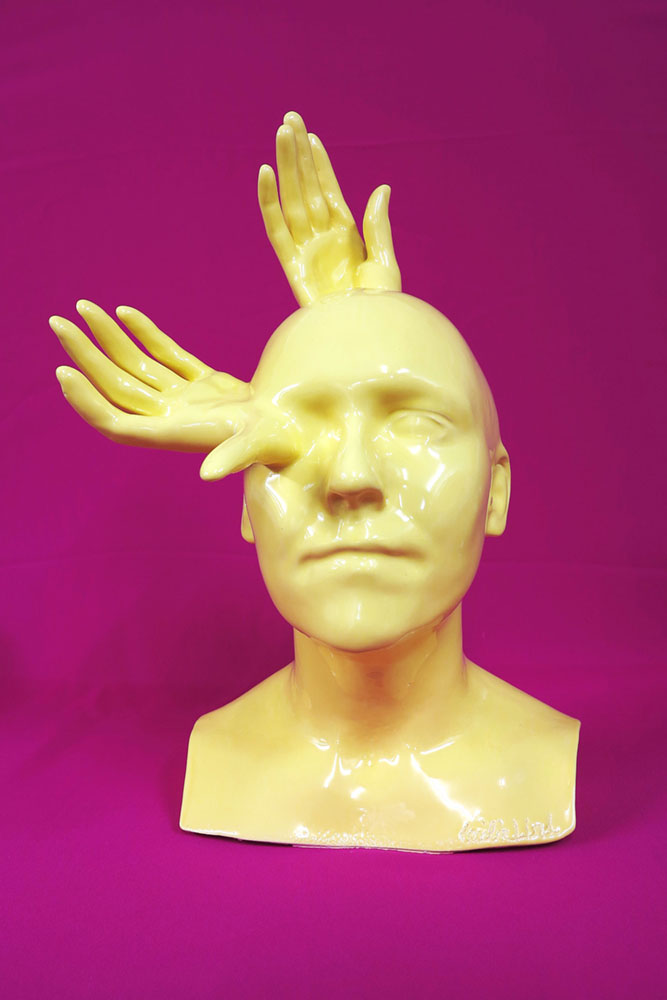 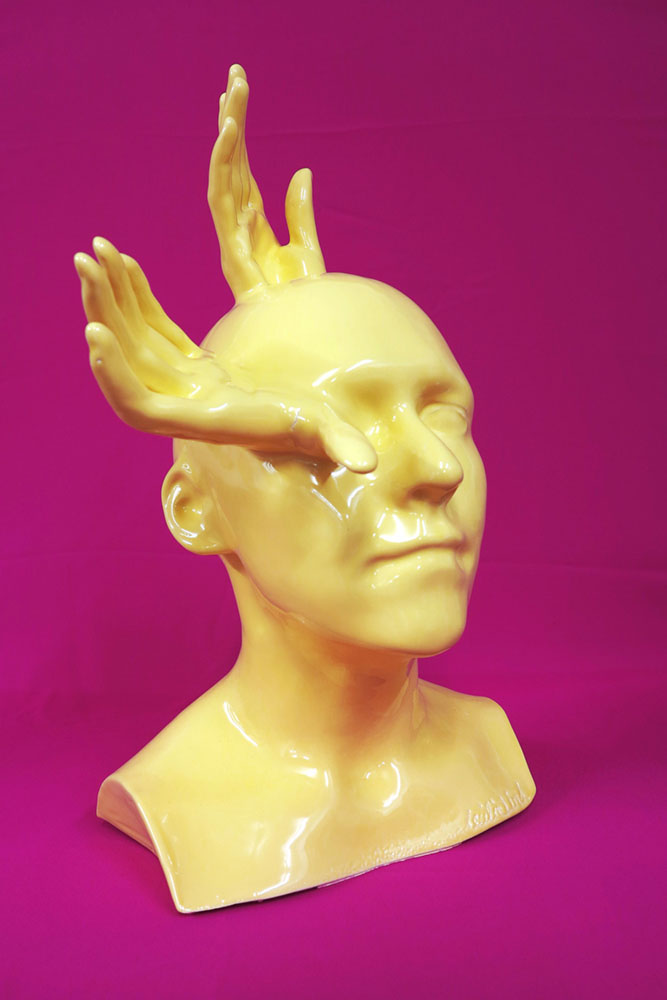 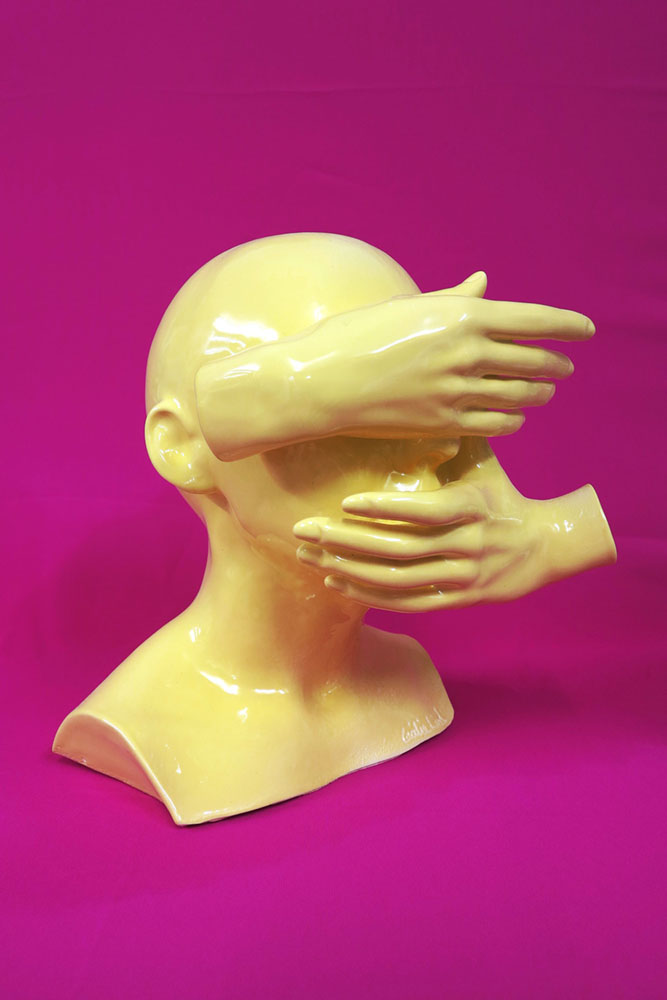 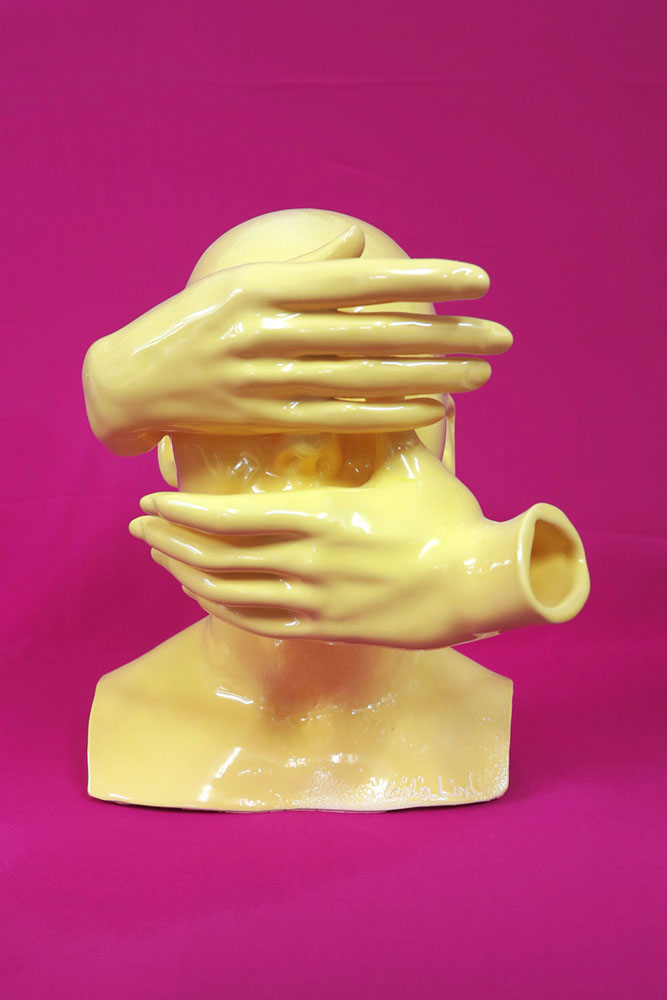 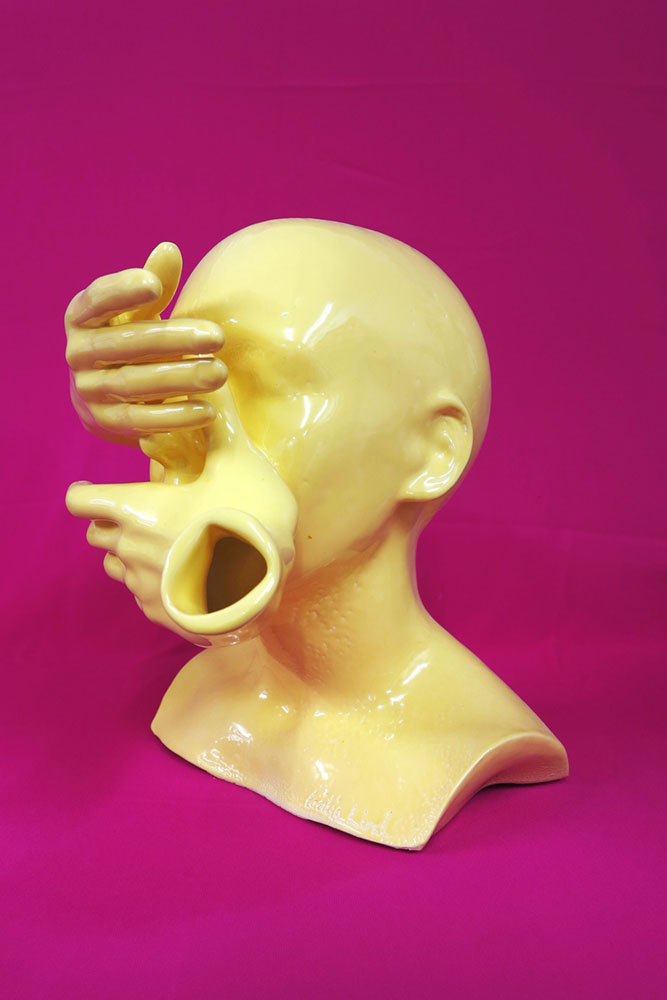 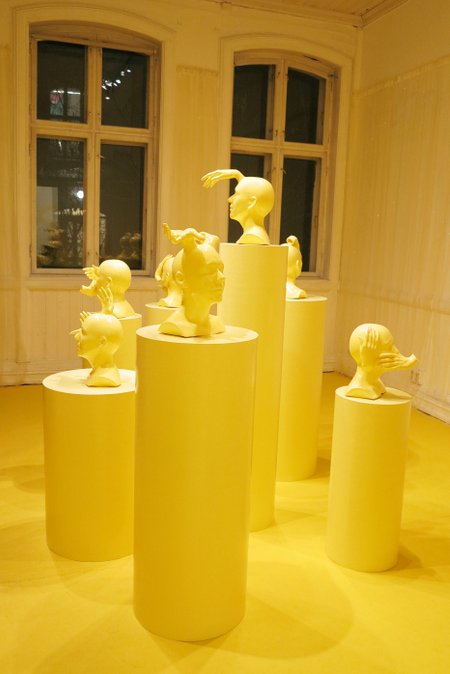 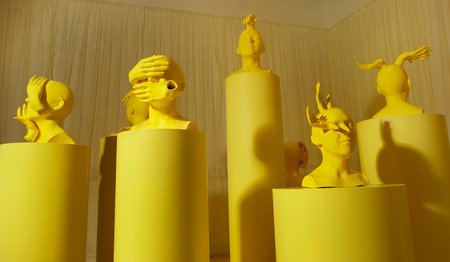 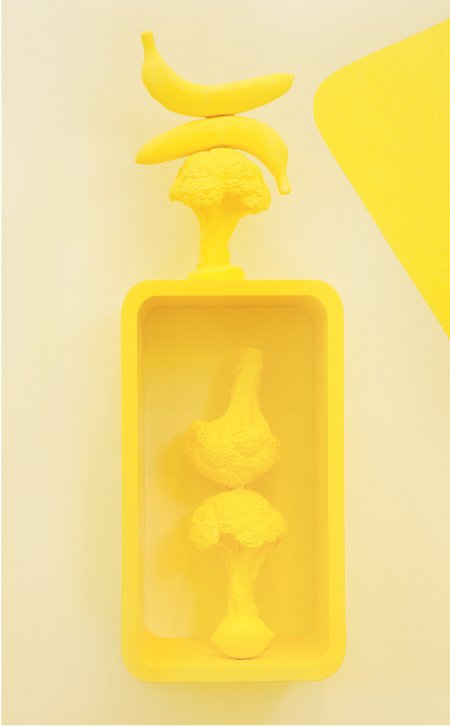 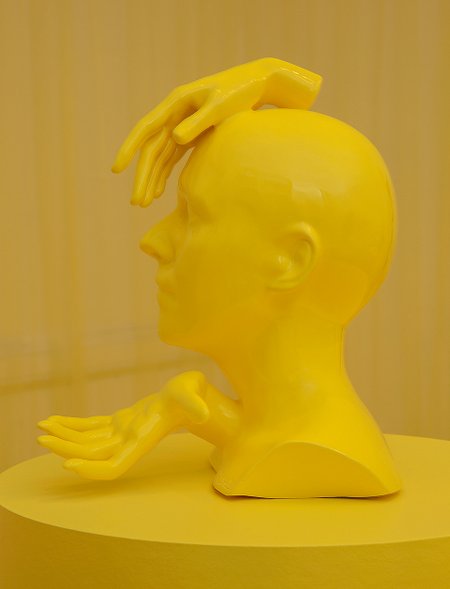 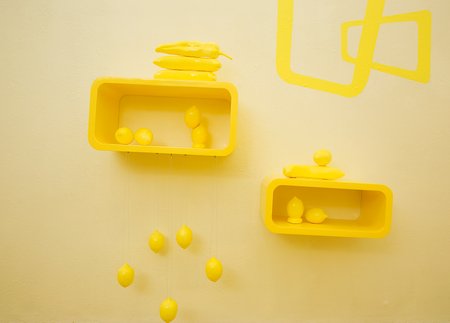 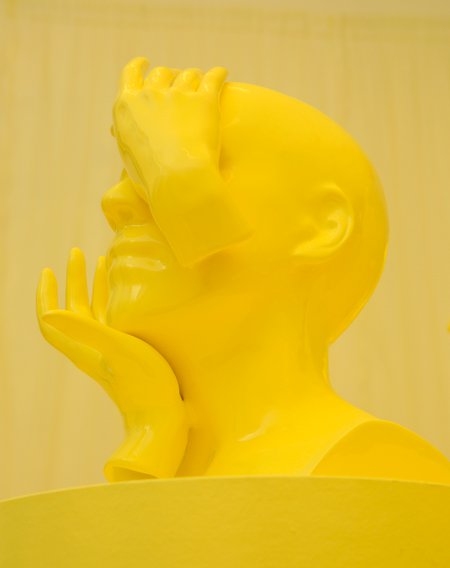 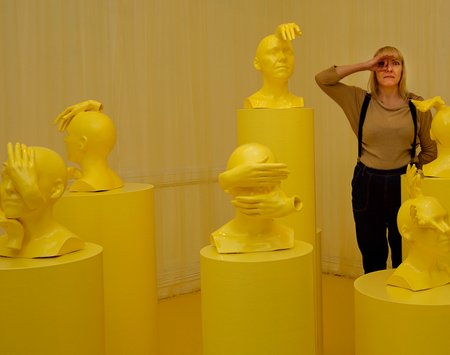 NIMBU – A STUDY OF THE COLOR YELLOW

Every color is affecting us in various ways. They all have history and contain symbolic value which differs from where in the world one is. This project examines some aspects of the color yellow which haves to do with perception and symbolism.

The installation Nimbu contains seven self-portraits in glazed porcelain. They all have one or two hands assembled in various formations on the head. The head and hands are often associated with both the intellect and physical action. To think, and to give and take. The installation also contains several other yellow sculptures of lemons, bananas, chillies, and broccolis. The walls are covered with yellow textiles and the floor with a yellow carpet. A surrealistic experience of the color yellow, accompanied by so-called yellow music.

The installation is conducted on an intuitive basis, without any external rules or strict concept, except from the color yellow.

Yellow symbolize gold, light, and the sun. Language-wise the word yellow is stemming from the Germanic word gelwa, which means shining and shimmery. In Islam gold-yellow represents wisdom and good advice, while pale-yellow represents sorrow and betrayal. In Egypt yellow is the color of envy and disgrace, and in Europe it is associated with cowardice. During the Ch´ing Dynasty in China (1622-1912) only the emperor was allowed to wear yellow.

The color yellow has been used in the arts since the days of the cave paintings, in the Egyptian grave chambers, and murals in ancient Rome. The color was mined from metallic oxides formed in earth and clay, minerals like Orpiment, herbs, and flowers like Safran, Turmeric, and Reseda.

Yellow is one of the primary colors, next to red and blue, and is used to blend colors like green, orange and brown. To obtain a clean yellow, one is dependent on natural occurrences or technically produced colorants. Yellow ocher is a common oxide (iron oxide) which has been used since the early days. Depending on its origin and preparation, it occurs in shades from dark brown-yellow to light lemon-yellow (Cyprus yellow). Naples yellow is a combination of lid and antimony which gives a lightening yellow shade, said to have been found on 2500 year old Babylonian murals. Among the great painters between 1200 to 1700, one has discovered a colorant made of lid and tin. It did not have a specific name and was rarely mentioned. It’s manufacture may have been the secret of the alchemists.

The Yellow Kid (1895) was one of the first comic strips in the USA, and was printed in both The New York Journal and The New York World. The cartoon depicted a bold child in a yellow nightshirt. The yellow nightshirt was the source for the name, and the comic strip was the origin of the expression The Yellow Press, or Yellow Journalism, because the strip was printed in both newspapers. What characterizes this type of journalism are speculations in exaggerations, sensations and scandals, bold letters and lavish use of pictures.

Yellow is also frequently used in advertising and the communication industry. Yellow has been cherished for its visibility, and is often used to get attention. Bright, yellow color attracts just as much attention as photos of children, animals, and lightly dressed or naked people (which the advertising industry knows sells). Yellow may signal an offer or reduced prices. It may also give associations to summer and sunshine. The travel industry often uses yellow in combination with turquoise/light blue to imitate sunshine and sea.

The yellow jersey is worn by the overall leader in Tour de France. Tour de France was the first sports competition where the leader wore a yellow jersey. These days it is commonly used in several races and other sports competitions. The yellow card in football is given by the referee to a player who is misconducting. This card is a caution. The color is also used on various warning signs in traffic and at sea. Yellow has no specific meaning in Christianity, but is traditionally associated with Easter. Yellow is also perceived as the color of Buddhism.

In the painting The Kiss of Judas (1304–06) of Giotto di Bondone, Judas Iscariot is wearing a yellow robe, which he wraps around Jesus as he betrays him with a kiss. The kiss was a signal to the high priests to arrest him. In the Renaissance yellow symbolized betrayal, and the symbolism would be obvious to a Renaissance person.

A yellow badge, a yellow patch shaped as a David star with the writing ‘Jew’, was from 1941 introduced as mandatory marking of all Jews in Nazi Germany. As early as 1180 German Jews were forced to wear a yellow, cone shaped, Jewish hat.

Yellow is commonly used in many nation’s flags. Sweden for instance. The legend tells that in 1157, during the first Swedish crusade, the Swedish king Erik the Holy saw a yellow cross manifesting itself on the blue sky. Yellow is also used in the flags of India, Bhutan, China and Spain, in addition to the European Union and The Vatican State. To mention a few.

The natural pigment xanthophyll brings color to a number of natural things, from bird’s feathers, flowers and fruits, like bananas, and to egg yolk. It is also the pigment causing the leaves to turn yellow in the autumn.

Whether the way we perceive colors are innate, is doubtful. In 1988 NASA conducted a study on the theme, and concluded that it is unlikely that we are born with either physical or mental reactions to colors. They don´t believe that we have a set of preset reactions to colors, but rather that we develop associations according to our experiences throughout our lives, and that may cause physical reactions to certain colors. The reason for the research was to find out which colors the interior in a spaceship could have.

The expression ‘yellow music’ was used to describe early stages of Chinese popular music in Shanghai in China during the 1920-, 1930- and 1940s. The word/color may in Chinese have a connotation to pornography and sex. The Chinese communist party viewed popular music as obscene and sexually suggestive. The expression was in use till the end of the Cultural Revolution in 1976. Nimbu is accompanied by yellow music, performed by Zhou Xuan.

There is a lot of yellow color in our surroundings. In the installation Nimbu, everything is yellow. It is a puzzling and strange sensory, triggering associations, emotions, amazement, and memories among the audience.