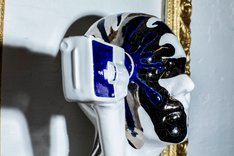 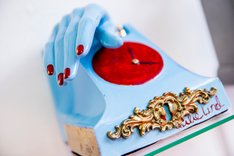 This art project examines the relationship between objects, objectification, sexualization and the traditional gender roles – in relation to the mass media and social media.

Sex sells. Using exposed women in order to promote goods is a tactic that has become so commonplace that we rarely give it a second thought. Advertisers try hard to get our attention. We love to consume, and consummation starts with our eyes. We are bombarded with visual images in our everyday life. They dominate and manipulate our sense of reality.

What is the definition of an object and what is objectification? What is the difference between objectification and sexualization? Is the mass media and advertising industry to blame for all the focus on appearance – and are they the reason why teens decides to objectify and sexualize themselves on social media? Is this a result of women being regarded as the weaker gender, tasked to facilitate the man's needs? Traditionally the woman's role in Western society was in the kitchen, with a wire to the bedroom. She was to keep the house clean and tidy, give birth to children, and look her best for her husband. Fortunately we have moved on from this idea in the West. However, is an old incorporated pattern still lurking?

“Normally an object is a thing which can be touched and felt, but it can also be a person, an animal, a property, an element in the universe or, for example, a state of mind that is the object of research.” (Wikipedia, 2018).

This installation is based on ten sculptures of the artists’ self-portrait, juxtaposed with various objects, mounted on the wall with thick gold frames. Accompanied by five modified, surrealistic sculptures, and a mirror. The room is dressed with wine-red velvet draperies and a red carpet on the floor. In the background you can hear a sample from the song «I´m too sexy», by Right Said Fred. The atmosphere draws associations to the Baroque, The Red Light District in Amsterdam, and Kitsch. Is it stylish or tacky? Vulgar or elegant? Sexy or cheap?

«We have been objectified to such an extent that we are no longer seen as human beings but as sexual gadgets. We have been separated from our whole. Turned into a commodity. Femininity has been so far removed from our nature that it has become alien to people. Something they are afraid of. Something that needs to be controlled, censored or concealed as if it were a looming threat. But I believe the real threat is the imbalance that has been cultivated from this patriarchal society».

Studies have shown that objectification can be linked to sexual coercion in romantic relationships. More alarmingly, objectification is also statistically linked to sexual violence. This affects women all over the world. We are witnessing stories of sexual violence used as a weapon in war. The aim is to physically destroy the female´s genitals, traumatize them and the society they live in. Some women get pregnant and give birth to an unwanted child – and/or are left by their husbands because they can’t bear the shame of living with a raped woman.

Someone who’s being objectified doesn’t get to choose how they’re objectified, much like an object doesn’t get to decide how it’s used. Objectification doesn’t consult ones preferences. It’s indifferent to them.

Looking at a person you don’t find attractive and dismissing them as a failed sex-object that’s not worth your time, is just as objectifying as reducing another person to an object of lust.

Actual objectification does not let its objects decide what they want to get out of the deal. That’s why most people would rather be a person than an object.

In a paper published in Psychology of Women Quarterly, researchers from Bridgewater State University defined “objectification” as the act of viewing a person as an object with an emphasis on their physical appearance.

There are several components to sexualization, and these set it apart from healthy sexuality. Sexualization occurs when:

The 2018 Nobel Peace Prize went to the Dr. Denis Mukwege from Kongo and Iraqi Nadia Murad, who was held as a sex slave by the terrorist grope IS. Both received the prize for their engagement to stop sexualized violence used as a weapon of war.

This work has been exhibited at Oslo Prosjektrom, Norway (2019)